I begin this post as I shall continue it—with images of myself.

Images of a fat woman with arms, a belly, breasts, and more chins than is considered strictly allowable in polite society.

I shall include images of a fat woman in clothes that fit her.

I shall include images of a fat woman looking delighted with her life.

I shall include images, photographs, even,—and this is most important—of a fat person with a head.

Why the italics, you wonder? What is so unusual, or as I have said, so important about images of a fat woman with a head?

While the situation has improved somewhat as the fat acceptance movement has gained ground, images of fat people—especially fat women—tend either not to have heads, or the subject of the photo is looking away. If the subjects are very fat, say, over 400 pounds, and they are looking into the camera, most of the time the photo is made public to ridicule and shame the subject.

Look at articles, even ones that purport to describe advances made in fat acceptance, and see what the media outlets choose as images for the articles. You will find, most of the time, I’ll warrant, that the images they choose are of fat people in ill-fitting clothes, people with no heads, people on whose bellies or butts or thighs the camera is focused.

For example, I just saw a photo of a lovely, very fat woman with long, straight auburn hair. She was looking away from the camera, and she was sitting on a beach towel among other beachgoers. She was wearing a bikini—go, girl! The headline of the article was about how sedentary lifestyles decrease longevity and how obesity must be treated as a disease.

To my knowledge, neither the writer of the article, nor the one who took her photo has any idea whether the subject of the image is sedentary or not. It’s very likely that they don’t know anything about her health. They, like the people the writer interviewed or quoted, don’t know a thing about her, except that she’s fat.

Regular movement, more commonly called “exercise,” healthful water, good sleep and plenty of it, and a varied diet are all great for us. Dark chocolate, red wine, and coffee may even be great for some of us.

None of those things means being thin, or worse, trying to get thin, is good for all of us.

As you can see from my photos, I am a very, very large woman. It makes me uncomfortable to say how much I weigh, so I won’t. I’m sharing more than most people would like to as it is.

My body is the size it is for all kinds of reasons, many of which are unknowable. Some of them are clear and common, however.

I have always been on the big side. Genetics have played a role, certainly. But no one in my family is as big as I am. Not on either side. No, my size is—in part, mind you—due to some other things.

For one, as Ellyn Satter, the brilliant writer who has helped thousands of parents bring their children up with a a sane relationship to food, would note, my food was restricted or associated with shame for as long as I can remember. She would also note that children who are shamed for eating or whose food is restricted are more likely to grow up fat than are their counterparts.

One of my very first memories is of being told, “You don’t need that,” when I reached for another cookie or cracker or something. It’s not the food I remember. It’s the confusion and the shame that followed. Oh, I learned, I don’t “need” this food I’m hungry for. I’m “too much of a chunk” as it is.

I learned early to ignore whether I was hungry or not. Not to know. My hunger had nothing to do with whether I was supposed to eat.

I learned at school and from my cousins and aunts that I was shameful. Not that something about me was shameful, but that I myself was shameful for being fat.

At school, I was pushed around, spit on multiple times (including one charming even when I had to wipe someone’s phlegm from my eye), and of course, called every fat-shaming name in the book.

My eldest aunt told me if I didn’t “stop eating” I’d have to make my own clothes one day because there’d be none big enough for me. I was probably a US size 14 at the time, and in my early teens.

My father, who had Type I diabetes, was forever trying to lose weight, and mostly only succeeding when he was suicidally depressed. To encourage his (and my) weight-loss efforts, he wrote “respice finem” on the refrigerator in marker.

“Respice finem” is Latin for “mind your end,” as in “pay attention to your death.” He told me he meant it as a double entendre. That if his “end”—his ass—didn’t get smaller his “end”—his death—would come sooner.

My father taught me directly that fat = death.

And so food became my enemy and my comfort, both. Shame and desperation twined together.

I learned to sneak food and eat it in my bedroom. Mostly things like sleeves of crackers. Easy-to-hide carbohydrates.

I went on diets. I made promises to myself. I attended Weight Watchers. Once I lost forty pounds. And every time I gained it all back and then some. Every. Single. Time.

A new doctor asked me this week if I had ever restricted my food in an attempt to lose weight. I had to work really hard at not letting loose a barking laugh. Has she never met a fat person? I mean, I suppose there are some who have never dieted—you may be one, for all I know—but I’ve never known one.

So there’s all this. The addition of some psych meds that helped me gain over a hundred pounds, and you have the girlish figure I sport today.

But here’s the thing. The things, I should say:

I am married to the love of my life.

I have work I adore.

My family loves me.

I have friends from Johannesburg to Bangkok and all over North America.

I love well and I am loved well.

I am NOT happy with the boor who once told me that whales like me didn’t deserve to live. (By the way, if you want to contribute to the whale tattoo fund I’m putting together, let me know. Whales are the BEST.)

I am NOT happy that girls as young as four are going on diets and their parents, doctors, and 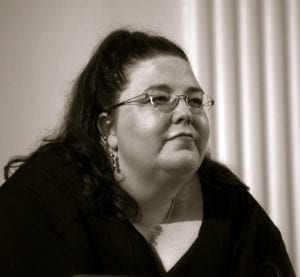 teachers, are “helping” them do it.

I am NOT happy that in the Unitarian Universalist congregation where I was an intern minister, my weight was considered by some to be a drawback to my ministry. Despite the people who came to me, thanking me for helping them love themselves better. Despite the power of my preaching. Despite my teaching. Despite the first Principle of UUism — affirmation of the “worth and dignity of every person.”

I am NOT happy that fat feminine-of-center ministers have a much harder time getting full-time, spiritual leadership work in churches than their masculine-of-center counterparts do.

I am NOT happy that fat people are more likely to be unemployed than their smaller counterparts.

I am NOT happy that fat people are paid less and are less likely to get merit raises than their smaller counterparts.

I am NOT happy that fat children are being bullied, just as I was and worse, right now, as I write these words. As I type and tears come to my eyes. I know what I went through and I never want another child to go through it again.

What will you do to stop it?