The Ethic of Commitment and the Magic Cord

The Ethic of Commitment and the Magic Cord

Since I wrote about the omphalos, the navel of the world, in my last entry, something else has occurred to me. It is part of a teaching from the Wicca 101 class I offer, much of which comes from Stone Circle Wicca. The first tool I teach is not the athame, wand, cup, dish or cauldron (tools commonly associated with Wicca and Wicca-flavored Paganism in general).

The first tool is the cord.

My grandmother tied strings around her finger to remember important tasks.

My father wore rubber bands around his wrist in the same one. Sometimes he wore more than one; one each for each task to be accomplished.

The cord in my relatives’ secular contexts, as well as in Wicca, is a reminder of our place in the group, our intentions, and our commitments.

They were doing cord magic. The magic of re-ligion

The first cord we know, of course, is the umbilical cord. It is the highway of nourishment and waste that keeps us alive in the womb. It is the cord of commitment of the one who is pregnant, and of the one who is not born. It is also the cord through which the fetus passes hormones to say, “I’m working on it, I’m nearly ready to be born.”

This first cord we know expresses (in a most profound way) the ethics of connectedness and commitment.

Cords, as in the umbilical cord, express both connectedness and commitment. They can be quite literally binding. Ah, the ties that bind. 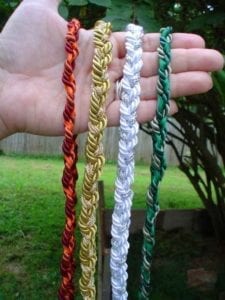 So what does all this tying and binding have to do with religion?

A possible etymology of the word “religion” is “re-ligare,” (espoused by early CE philosophers such as Augustine of Hippo). This theory of origin makes religion an action of re-binding, bringing together again. It is, in point of fact, to tie again.

Until the 16th century in Latin-influenced Europe, religionem, or religare, and eventually “religion” pertained only to religious orders. Many of these orders up until today express their religious identity by wearing cinctures, or cords, around their waists.

However, it is not only members of Christian religious orders who wear the cord.  Girdles, cinctures, cords around wrists, legs, waists, heads are worn all over the world by member of religions, especially those being initiated in some way. Hindu, Sikh, Jewish, and Wiccan practitioners all tie knots in cords around hands, legs, or waists.

Perhaps the best known tying of the cord in Wicca and other Paganisms (and versions of Christianity) is the handfasting. The tying of what has already been brought together. The circle of love. The cord that has no power of itself, but which nonetheless is the symbol par excellence of nuptial commitment.

But cords are not only to tie in circles.

In some branches of Wicca, the practice of “taking the measure” has been a significant part of early training. The first measure is the length of your body and the cord is used to take various other measures, like the length of your arm. The cord is then kept by members of the coven.

Further, cords may be for other magic. Tying knots—each one for “setting” an intention or commitment—is a classic use of cords. They may be for separation, for cutting apart relationships and former commitments. Braiding, tying, measuring, and cutting—all these and other actions can have magical uses, limited only by your imagination and intention.

So the next time you put a rubber band around your wrist or think of tying a string around your finger to remember something you’ve committed to do, be mindful of the magic you’re doing.

It is the magic of relationship, intention, and commitment, the work of the magical cord.

PrevPreviousWhere Do the People Come From?
NextA Few Paltry Words on Responding to ViolenceNext