Where Do the People Come From?

Where Do the People Come From?

Strange words to our English-hearing ears.

Each expression means, in its own way, the Center of the Universe. The Axis Mundi might be the World Tree in any of a number of myths. The Omphalos, or Navel of the World, might be anywhere that is held most sacred, anywhere said to be the site of the creation of the Land, People, or Universe.

Four Quarters Interfaith Sanctuary is a place in Artemas, Pennsylvania. (yes, that name is for real) where the people are building, Stone by Stone, a great Circle. When last I was there, there were 40-some Standing Stones, from East to South to West, and now they are coming around the North side of the Circle. I haven’t been there since 2010, so there are many more than when I last stood in Their presence.

But really, it is one Stone. One Stone that has created the Land as it is and the People as they are.

It is the one called the Mother Stone and She stands in the East, near the very beginning of the Circle. She is a slab of sandstone, cracked from upper corner to center. The only way to stop that crack from splitting the Stone in piece was to bore a hole and thus stop the path of the crack.

They passed their babies from the outside of the Circle space, through the hole in the Stone, where those babies were received by another, usually their fathers.

That simple gesture has become a fixture of the annual celebration called the Rising, the time when new Stones are raised, sung to, prayed over, and fixed in their footings in the Circle. The Baby Blessing, as it is now called, has involved dozens of children over the years.

Babies have been passed into the hands not only of fathers, but of mothers, grandmothers, sisters, heart-friends…and each time, the child is lifted up and their name told to the community. I understand that this year there were ten new children blessed in the Circle.

That Stone, the Mother Stone, is the Axis Mundi for me and for others. The Hole in the Stone is the Omphalos, the birthing place of the People, the Circle, and the Land as a Holy Place. 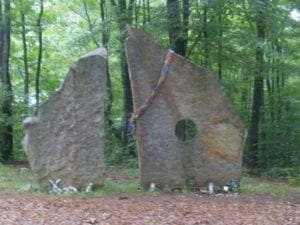 In my heart, in my dreams, the hills of Pennsylvania are the landscape of home. But now I live in the gorgeous landscape of the Pacific Northwest. Here are the many conifers. Here are the misty mornings that slowly give way to warmth in the late afternoon. Here is the rocky coastline with the great Stones that rise up from the water. Here are the Cascades:  The ones I know a little, Mount Hood, Mount St. Helens, Mount Rainier, Mount Baker…ones I hope to come to know more over time.

Here too are the reservations of many indigenous people. And everywhere are unfamiliar names. The names I know – Lackawanna, Kishocoquillas, Susquehanna, Youghiogheny…these are all being replaced now with other ancient words that are new to me.

Where has your spirit been given birth? When you close your eyes and look for the Sacred Within, where is its center? 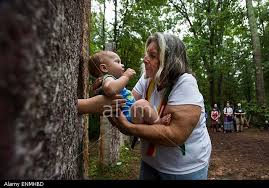